As a teenager growing up in the Northeast in the seventies, California was a mythic destination about which I knew mostly through the music of the sixties and news footage of concerts, Vietnam War protests, Ken Kesey’s bus, people enjoying life, TV shows, beaches, Ansel Adam’s Yosemite and gold.
My brother picked me up at the San Francisco airport days after my high school graduation and introduced me to the carnival, where I would work for two summers in games on the midway, traveling weekly from county fair to hot parking lot. In our group were some art students working the carnival in the summers. One of them was going to the San Francisco Art Institute and took me to visit the school, perched on a hill overlooking San Francisco Bay, where I would receive my BFA in Printmaking in 1981.

California has remained a deeply embedded facet of my life’s experience and I continually return to be energized by its changing light. I have a cabin and small studio on a mountainside two hundred miles north of San Francisco, where I have been coming since I was in my mid- twenties. It is difficult to describe the impact of a place on one’s life over time but being here has always given me hope and the courage to make my life the way I want it to be. I have grown partly, out of this place.

On the drive up here I pass through the town of Willits, where our carnival used to play Frontier Days on July 4th. We would camp at Quail Meadows campground and eat at Garibaldi’s diner, both now closed since the recession.

As a young art student at SFAI in the late seventies I was exposed to so much great Bay Area art in galleries and museums.  The William Wiley retrospective “Wiley Territory” at SF MOMA as well as Philip Guston’s survey (not home-grown), were hallmarks for me. The faculty at the Art Institute were all exhibiting at galleries downtown: Robert Hudson, Richard Shaw, Carlos Villa, Julius Hatofsky, Sam Tchakalian , Tom Akawie, Tim Berry and  Alvin  Light. George Kuchar was teaching filmmaking and invited all comers to collaborate on films. Angela Davis taught a lecture class on Art and Revolution.  It was eye-opening and standing room only.

The Diego Rivera Gallery is to the left of the courtyard upon entering the school, housing a stellar mural by Rivera; a self- portrait of the artist on a scaffold overseeing an industrial scene.  This all inspired me to decide that I would rather try to be an artist than anything else. I had, since childhood, always liked the private time that drawing afforded: time slowed down and relished.

So now, when I come back here, all the early memories surface.  I feel a connection to all the teachers, artists, friends, family, events, years and feelings that grew in this place and continue to shape my outlook and my work. 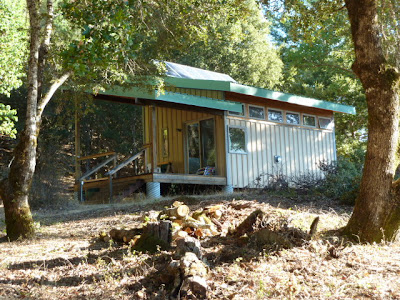 Seven years ago I was able to build a small studio here, which I love working in. We are off the grid here so I added a solar system to the studio and it provides plenty of power. I like the thought of using the sun to make ice in my small fridge.

In my studio here I have been doing mostly works on paper using pencil, colored pencil, oil pastel and watercolor. These I am able to roll and ship back to TN. It is fulfilling to draw and paint on paper, create new images, explore new territories. I feel a certain sense of freedom working here in the mountains of Northern California. I don’t have all of my tools and the space that I have at home in TN so I work with a different intention here. 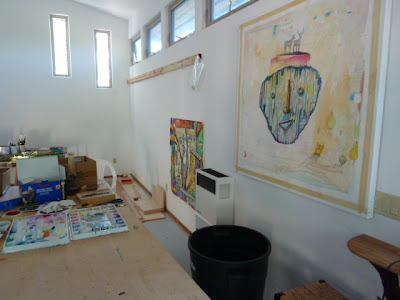 My goal is to invent new images and ideas that I can explore further back in TN. I have been doing 42x42inch drawing/ watercolors here, which I generally start by drawing something from nature that I find walking to the studio: a madrone branch, mushroom or seed pod. I begin by drawing the natural form realistically and then create a story around it. I like to just begin working on these pieces without thinking too much about meaning or narrative and then just see where the drawing takes me. There is always more meaning in the art than I can imagine. 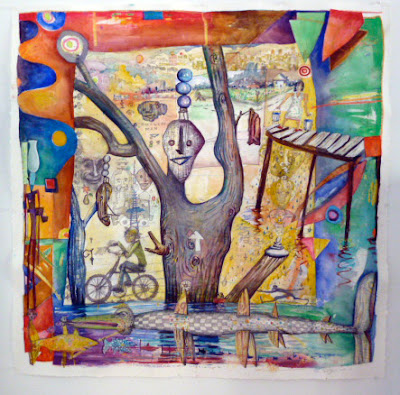 I will continue to return to this spectacular landscape to work and to just be and feel. I don’t feel encumbered here by the feeling that I should be accomplishing and doing all day long. I have cell phone service and can go to a neighbor’s for the internet but choose not to be connected here. 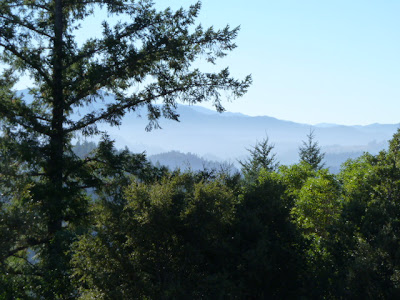 I watch the time go by and the light change and am so thankful that I found this place as a young man. I will watch the sunsets through the same old growth fir forest as an old man.

Posted by Andrew Saftel at 12:03 PM No comments: