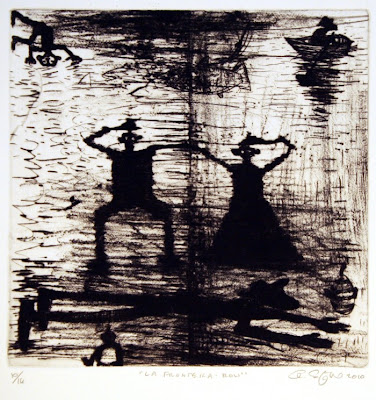 For the last several years I have been spending time in Patzcuaro, Michoacan, Mexico. I was first invited by some friends to visit Patzcuaro for my 50th birthday and on that trip, I was able to work in a printmaking workshop housed in an old Jesuit College, which has been converted into a cultural center.

I made a small drypoint etching there and was so impressed with the facility and the wonderful people running the shop that I vowed to return to engage in a larger project. Upon returning to Tennessee I was determined to invent a project in order to return to work in that shop.

In 2010 I received a grant from the Tennessee Arts Commission and drove back to Patzcuaro for a month's stay the following spring to produce the La Frontera woodcut and drypoint etchings. I fell in love with the town, its people and the Mexican culture and have been back many times since.

Last year we visited a shop in Patzcuaro, which sells very high quality rugs, sweaters and other woven goods run by an American woman named Ruth Mitchell de Aguillar, who went to Mexico from Alaska in the seventies. There she met and married a Mexican man and began dyeing wool for weavers, prompting her to start her own business.

At Ruth's shop, my wife and I each bought sweaters and that's when I noticed the interesting designs used in the carpets. I saw a sign saying that they do custom work and asked Ruth if they would be able and/or interested in making some rugs with my designs. She responded positively so I looked through my images on the computer and printed several of them. I should note that I simplified the designs a bit for the weavers by painting the printed images with opaque watercolor. 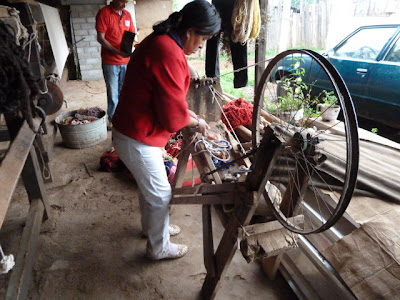 Ruth chose the first design, which I made by simplifying the drypoint etching titled “La Frontera/Row" (pictured above). I was impressed by this first attempt by the weavers to undertake my designs but could see room for improvement. This tapestry is 5x5 feet .

I see these tapestries being used as wall hangings but they can also be used on the floor. A tapestry is a weaving in which an image or design is created by working different areas of the textile with colored threads as opposed to a weaving where a shuttle goes back and forth across the entire textile at once to distribute the threads evenly across the piece. 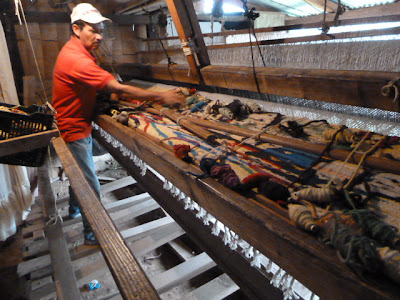 The weavers that Ruth has been working with are an extended family named the Servins. I visited them when the master weaver Victoriano Servin was working on the second design, “My Island," which was taken from a fairly complex small watercolor, pen and colored pencil drawing. When I visited, Victoriano had completed about 24 inches of what would eventually become the tour de force 7 ½ by 9' "My Island" tapestry.

﻿
I was completely amazed by the astonishing colors and mysterious process with which he was working. He works from the drawing with no pattern behind the loom and starts at the bottom. Working his way up, he uses an intuitive and very skillful eye to get the proportions and composition right. He literally draws with the colored threads as he works his way up through the composition. 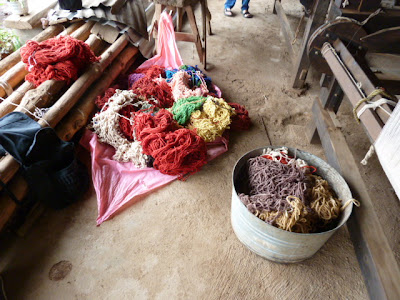 Ruth dyes all of the wool according to the drawing and creates many exceptionally colored wool threads to give to the Servins to weave. We walked around the family complex where there were many looms in operation by different family members. The whole family was so warm and welcoming to me and we immediately became friends for life.

Several months later the finished “My Island” rug was shipped to me and I am completely amazed and extremely excited about it and the prospects for future projects. Victoriano takes liberties with aspects of the imagery and colors, which I encouraged, so this process becomes a collaboration between us.

I asked Victoriano to add his initials alongside mine on these rugs since they are collaborations. He has been weaving for his whole life and had never signed a rug. This is a shame to me for he is a master craftsmen who should be recognized for his talents. I have created 12 designs that he will work on in to the future.

Also, the Servin's son Ricardo just completed his first attempt at one of my images and did a great job. I created 5 designs for him to weave that are somewhat simpler than the designs his father undertakes.

For me, this collaboration is very meaningful on a personal level as well as an artistic one. It is very exciting to see my work interpreted in another medium, however, it is more important to really connect with artisans from another culture. By giving them different sorts of imagery to weave, challenging their skills and assumptions about their craft, I feel that this encourages them to push their limits and elevate their craft.

I see exciting potential for this collaboration. The director of the cultural center in Patzcuaro has invited us to exhibit the rugs along with the original artwork in a gallery exhibition that would feature myself and the weavers equally. My hope is that this will get the Servin family some long overdue recognition for their very skillful work.

Behind the Scenes: Summer 2012


This video was shot this summer after I had gone through something of a frustrating time with my work and ended up creating this piece (also seen in the blog header) called "Summer 2012." I often incorporate found objects in my art and this piece contains pages from an old autograph book -- the kind in which students would write little notes to one another such as "don't forget me over the summer."

One of the pages contained the words "I like Miss Lula" so I used that text as the central part of the work. The image that became Miss Lula (the blonde woman in blue) was from a previous project of small portraits I had done, but it captures who I think Miss Lula might have been.

The figures to the far right are depictions of woodcarvings by a Tennessee folk artist and the little dog, I carved from wine corks over the course of several days. This panel is a good example of what can be created when you allow yourself to have fun with your work. I felt like an 8-year old boy, just coming into the studio and having a blast.

I delivered this piece to Bennett Galleries in Knoxville last week where it was part of a First Friday exhibition, along with a couple other newer works I have done. If you're in Knoxville, stop in and see it. I'm happy to answer any questions you might have via this blog or my email so please feel free to get in touch. I hope you enjoy it!
Posted by Andrew Saftel at 5:34 AM No comments: