Fruits of the World Exhibit in Mexico 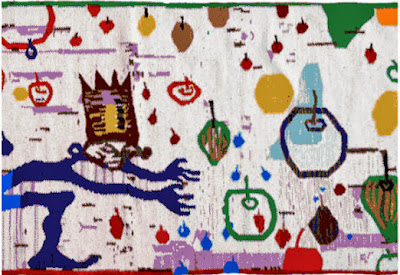 I'm very excited to announce a new exhibit opening tomorrow (October 25th) at the Centro Cultural Antiquo Colegio de Jesuita in Patzcuaro, Mexico. The show, called Fruits of the World, includes woodcut prints, drypoint etchings, watercolor and other mixed media pieces as well as a selection of tapestries created through a collaboration with Mexican weavers.

I currently have a studio in Patzcuaro, Michoacán, Mexico but I first visited the area on vacation in 2009. I returned to the Jesuit Cultural Center through a grant from the Tennessee Arts Commission to hold a printmaking workshop.

The new exhibit will include many of the prints created at the workshop, including "La Frontera," a work whose title means the border and explores the cultural, social, and political issues surrounding the border between Mexico and the United States.

The Fruits of the World exhibit also includes a series of hand-woven, custom-dyed woolen tapestries. The imagery depicted in the weavings is mine, but the execution of the designs has been undertaken by local area master weavers.

As an artist and inventor of images created in diverse mediums, I constantly seek collaborators and defer to other's skills and different levels of interpretation of my images. I encouraged the weavers to take liberties with aspects of the imagery and color, so this process became a collaboration between us.

It is not merely a reproduction of the images I drew, but an interpretation of them in wool; grown, dyed and woven in Michoacán, Mexico.

I requested that the weavers sign their creations alongside my own signature, something they had never been given the opportunity to do. I plan to honor their contribution at the exhibit when the tapestries are on display for the first time.


To see the brochure for this exhibit, please click here.
Posted by Andrew Saftel at 1:06 PM No comments:

In October of 2010, my colleague and fellow artist Whitney Baker and I were invited to Bangladesh to spend the month through a U.S. Embassy Visual Arts Initiative project titled "Janmasthaan/Native Land."

During my time in Bangladesh, I held art workshops with some leading Bangladeshi artists as well as students and community members. The workshops were centered around exploring the concept of where we all come from, what we have in common and our connection to the land. We also dug deep into the topic of how art can bring up issues about these things.

After working with artists and university students, we were invited to visit the Jaago School to work with children on an art project. I learned of the Jaago Foundation School from Garrett Wilkerson, a U.S. Embassy cultural affairs officer. I was looking for a worthwhile cause to support and Garrett suggested the Jaago as one to explore. After I inquired, I learned the school was interested in having me come and do an art workshop.

The workshop would culminate in assisting the children in painting a large mural at the school. From the moment I arrived at the school, after seeing the harsh reality of life in the streets of the neighborhood, I was overwhelmed by the joy and pride that the children expressed. My first impression was that the school was an oasis for the children in the midst of a life of struggle and extremely limited opportunities.

The school was very organized, with rules of conduct and behavior and a nurturing environment in which the students thrived. The staff, made up of a diverse group of young volunteers, was very courteous, professional and warmly caring. After a brief tour of the building, which was neat and clean, we entered a rear courtyard that had been transformed (with very little notice) in to an outdoor classroom/ studio, complete with awning and carpet for our workshop.

I was almost moved to tears when the one hundred children, dressed in clean uniforms, well –fed and with art supplies in hand, marched in, in orderly rows and took their places with us. Korvi Rackshand appeared and led the students through greetings and songs. I was particularly moved when they sang, "We shall overcome" in English and Bangla. After several songs, which they sang in a heartfelt manner, Korvi and the volunteers directed the students, aged from about 6-12, to assemble around the perimeter of the carpet for instructions. They were very well behaved and obedient. It seemed to me that they were well aware of the fact that being in the school was a tremendous opportunity for them.

With the help of an interpreter we introduced the idea of Native Land and asked them to begin drawings using their own supplies and some we had brought. As they quietly began drawing, Whitney and I painted a fifty foot long land and seascape line image on the white wall with small brushes. The idea was to do the outline and then use images that the children drew to populate the landscape. They all continued to concentrate and create images, calmly going in to their imaginations and pulling out everything from country scenes with trees, animals and people to scenes of the city where they live.

The art that they made was tremendous and every student’s was different. As some of the drawings neared completion we began to make selections of the images for the mural and asked the student to accompany us and hold up the drawing while we copied it larger to the mural in outline form. They then painted their name below the image. As we painted their images on the wall the mural began to take shape and to tell a story that became a mixture of fact and fantasy.

The students became very excited and all began milling around and pressing their drawings on us to copy, which was to be expected. We tried to get a little of each students work onto the mural. This whole process seemed to transport them to a world of ideas, images, colors and stories. After the line images were drawn the students were organized in to groups of ten or so and patiently waited in line to eventually be overseen by a volunteer while they painted colors with the oil –based enamel paint onto the wall. They loved the act of painting and were respectful of each other as they took turns.

When things got a little hectic Korvi would simply speak up with instructions and they would settle down. The volunteers were so helpful and supportive of the activity and so happy to see the kids so happy. The smiles and proud looks on their faces were unforgettable. In the end, the volunteers, as well as some of the students, had paint-covered hands. As the mural neared completion, the paint began to run out and the students calmed down, we were given a rousing “Thank You” from the students who then broke up into circles, each led by a volunteer. They recited the alphabet in English, went through numbers and sang songs. I sat in one of the circles and drew pictures of images that the kids called out and then they would spell the word describing the image in English.

After two hours or so of this magical time the students filed out in line as they had come in and the mural was nearly complete. I hope that the students are filled with pride when they see the mural and it reminds them of our time together. In one morning at the Jaago school I learned that faith in humanity and the effect that education can have on a local population is tremendous. I saw for myself the difference between the barefoot, tattered and hungry kids on the street and the students at the school.

Something as simple as a building, a uniform, a bite to eat, a little health care and some loving and caring teachers, can transform the lives of thousands, contribute to positive change and, in the long run, turn the tides in Bangladesh . Each and every student in the Jaago school will absolutely have a better life with a chance for advancement than those outside it’s doors, especially after learning English. What Korvi and his volunteers have and will continue to do at the Jaago school(s), with, so far, minimal funding, is more than a miracle for so many children.

The beautiful, magical and tragic country of Bangladesh needs a lot of help and this school is a beginning. I am now back at home in the U.S. and in retrospect, the morning at the Jaago School is one of the most remarkable experiences that I had in Bangladesh and, for that matter, in my life. Rafu, one of the students, did a drawing that was included in the American Center’s final exhibit at the Dhaka Art Center and I will never forget his face when he saw it framed and hanging at the opening.

I encourage anyone who can to support the school and/or sponsor a student and I hope to return to paint a bigger mural on the next Jaago school wall. For just $20/month, you can invest into the life of a child. I am thankful to Lauren Lovelace and the American Center of the U.S. embassy for making this experience possible and to Korvi Rackshand for seeing a need and finding a way to fulfill it.